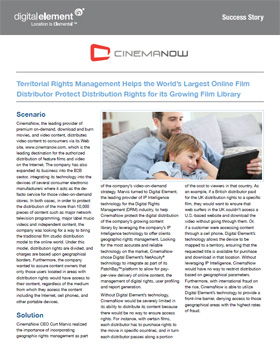 CinemaNow, the leading provider of premium on-demand, download and burn movies, and video content, distributes video content to consumers via its Web site, www.cinemanow.com, which is the leading destination for the authorized distribution of feature films and video on the Internet. The company has also expanded its business into the B2B sector, integrating its technology into the devices of several consumer electronic manufacturers where it acts as the de-facto service for those video-on-demand stores. In both cases, in order to protect the distribution of the more than 10,000 pieces of content such as major network television programming, major label music videos and independent content, the company was looking for a way to bring the traditional film studio distribution model to the online world. Under this model, distribution rights are divided, and charges are based upon geographical borders. Furthermore, the company wanted to assure content owners that only those users located in areas with distribution rights would have access to their content, regardless of the medium from which they access the content including the Internet, cell phones, and other portable devices.

CinemaNow CEO Curt Marvis realized the importance of incorporating geographic rights management as part of the company’s video-on-demand strategy. Marvis turned to Digital Element, the leading provider of IP Intelligence technology for the Digital Rights Management (DRM) industry, to help CinemaNow protect the digital distribution of the company’s growing content library by leveraging the company’s IP Intelligence technology to offer clients geographic rights management. Looking for the most accurate and reliable technology on the market, CinemaNow chose Digital Element’s NetAcuity technology to integrate as part of its PatchBay™ platform to allow for pay-per-view delivery of online content, the management of digital rights, user profiling and report generation.

Without Digital Element’s technology, CinemaNow would be severely limited in its ability to distribute its content because there would be no way to ensure access rights. For instance, with certain films, each distributor has to purchase rights to the movie in specific countries, and in turn each distributor passes along a portion of the cost to viewers in that country. As an example, if a British distributor paid for the UK distribution rights to a specific film, they would want to ensure that web surfers in the UK couldn’t access a U.S.-based Web site and download the video without going through them. Or, if a customer were accessing content through a cell phone, Digital Element’s technology allows the device to be mapped to a territory, ensuring that the requested title is available for purchase and download in that location. Without leveraging IP Intelligence, CinemaNow would have no way to restrict distribution based on geographical parameters. Furthermore, with international fraud on the rise, CinemaNow is able to utilize Digital Element’s technology to provide a front-line barrier, denying access to those geographical areas with the highest rate of fraud.

By incorporating NetAcuity into its PatchBay™ platform, CinemaNow ensures its distribution partners that it is using a major-studio approved and reliable solution and that their access rights are protected, which helps the company as it continues to build out its continually expanding licensing portfolio. “Digital Element’s technology is absolutely necessary in the digital rights management industry,” says Marvis. “We cannot be in business without it. It’s not a matter of increasing sales – I can’t distribute films without it.”