Baseball Legends: What Would They Be Worth Now?

Home » Baseball Legends: What Would They Be Worth Now? | Digital Element

We all have favorite ball players from the past, with legends like Babe Ruth, Mickey Mantle and Lou Gehrig once coveted in every pack of baseball cards. But, as the game has changed over years, we wanted to know what the icons of yesteryear would be earning if they played pro ball now, and who would they play for?

At Digital Element, we deal with big data like audience insights and geolocation every day, so we wanted to put our data analysis skills to use in a way that people could relate to and enjoy. We’ve taken the statistics for twelve of the greatest baseball players of all time, comparing them like-for-like with modern day equivalents. Next, we analyzed the differences in performance to work out what the legends would be paid in today’s game and who they might play for.

To work out a direct comparison between players, we began by selecting twelve legendary names from the game of baseball and choosing twelve current MLB players who play in the same position and have been rated as some of the best in recent years. We then took the 162-game averages for each player and worked out the percentage difference between the two.

Taking the current salary of the 2020 player, we worked out the salary the legend would be paid for each statistic, taking the biggest rise as the amount they’d be paid – assuming the player would be paid a salary to match their greatest skill.

We also looked at the legend as if they were going to play for the same team as their modern-day equivalent, assuming they would have the finances to pay the amount.

New York Yankees’ legendary right fielder Babe Ruth was first up at the plate. We chose to compare him to Mookie Betts of the Los Angeles Dodgers, and formerly of the Boston Red Sox. Betts won the Most Valuable Player, Silver Slugger, Gold Glove, batting title, and World Series in 2018, the first player to do so in the same season.

As for Ruth, he broke the single season MLB home run record in 1919 and was one of the first players inaugurated into the MLB Hall of Fame.

Based on Betts’ annual salary of $27 million, we’ve calculated that Babe Ruth would currently earn $44,357,143 if he were playing for Los Angeles Dodgers in 2020. This is based on the percentage difference on his strongest statistic – home runs. 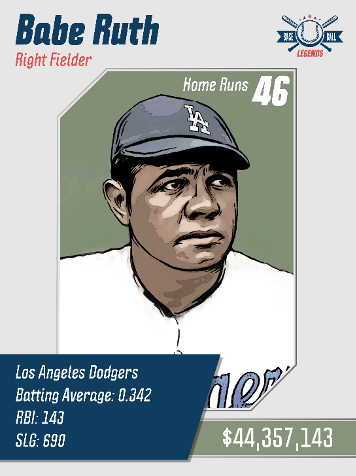 Having just made a big move to the New York Yankees for the 2020 season, Gerrit Cole is possibly regarded as the hottest pitching property in MLB. Cole was the 2019 MLB strikeout leader and has been a three-time all-star. Walter ‘The Big Train’ Johnson played his entire career as a Washington Senator and still holds the all-time record for shutouts at 110 – over 90 years since his last game. He was one of the first five players inducted into the Hall of Fame as is still regarded as one of the greatest pitchers the game has ever seen.

Gerrit Cole just signed the biggest MLB contract for a pitcher at $38 million a year for the New York Yankees. If the Yankees were to sign Walter Johnson in the modern game, thanks to his superior earned run average of 2.17, they could expect to pay him $53,419,354 per season – that’s an increase of 305,153% on his 1914 salary. 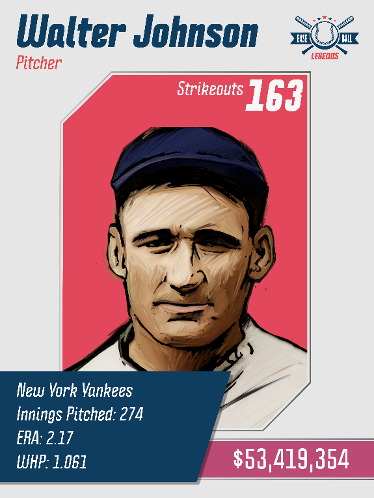 ‘The Say Hey Kid’ Willie Mays spent most of his career playing for the New York/San Francisco Giants, and is still one of only five players to have eight consecutive 100-RBI seasons. We’ve compared the great Willie to Mike Trout of the Los Angeles Angels. The New Jersey-born center fielder as of the end of 2019 was top of all major league players for career slugging percentage and on base plus slugging.

Based on Mike Trout’s already record-breaking salary, and Willie Mays’ slightly superior record for runs batted in, we’re estimating that he’d be earning $33,575,980 if he were to sign for the Los Angeles Angels today. 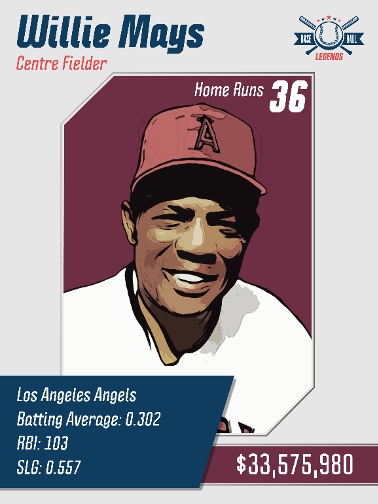 New York Yankees first baseman Mickey Mantle, often referred to as the greatest switch hitter in the history of the game, won the Triple Crown for batting average, home runs and runs batted in during the 1956 season. Freddie Freeman of the Atlanta Braves, who is a four-season MLB All-Star player, won the Golden Glove Award in 2018, before taking the Silver Slugger Award in 2019.

The Mick is a Yankees legend, making it into the MLB team of the century in 1999 and the Hall of Fame in 1974.

Based on Mantle getting twice as many stolen bases (10 to 5) in his illustrious career, plus more runs, home runs and RBI, our statistics indicate that he’d be worth twice as much to the Atlanta Braves in the modern game. 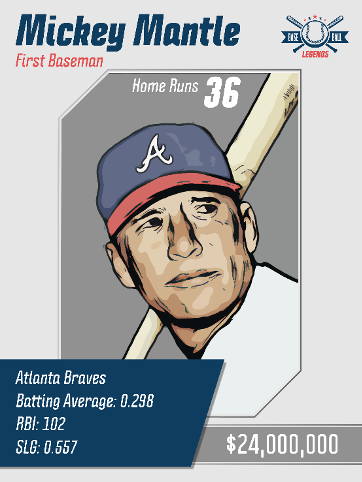 Hammerin’ Hank Aaron played 21 seasons for the Milwaukee/Atlanta Braves, playing most of his games as a right fielder. He has three Golden Glove awards and was named MVP as the Braves won the 1957 World Series. Christian Yelich won a Gold Glove Award in 2014, the Silver Slugger Award in 2016 and 2018, and the National League’s Most Valuable Player Award in 2018.

Yelich currently plays outfielder for the Milwaukee Brewers, after being drafted from the Miami Marlins.

If Hank Aaron were to turn out for the Milwaukee Brewers in 2020, our statistics show that a superior RBI, batting average and number of run would help him earn $10,791,667. 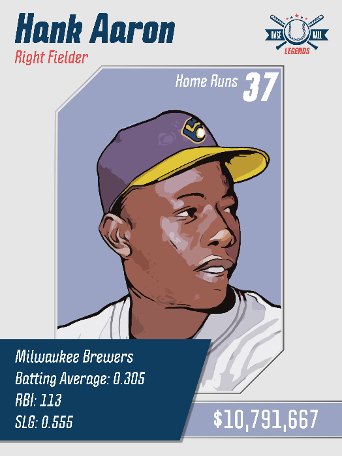 Ty Cobb, ‘The Georgia Peach’, is one of the most successful players of all time and is credited with 90 different MLB records during his career, still holding the highest career batting average in MLB to this day. Cody Bellinger won the National League MVP award in 2019 and is the son of Clay Bellinger.

Considering Cobb’s illustrious career, it comes as no surprise that his salary would be much higher at the Los Angeles Dodgers in 2020. With a much higher number of stolen bases and hits, our research indicates that he’d be earning $39,428,571. 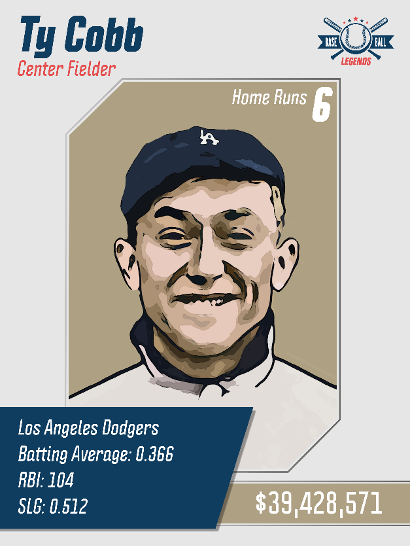 Eight-time all-star and Houston Astros pitcher, Justin Verlander is noted as one of the great pitchers in the modern game. A one-time World Series winner, member of the 3,000-strikeout club and 2011 Triple Crown winner, Verlander is one of the most decorated pitchers around in 2020. Despite ending his career over 100 years ago, Cy Young still holds the MLB record for most wins at 511 and won the 1903 World Series with Boston Americans.

Despite many years separating these two pitching giants, their shared influence on the art of pitching is undeniable.

Justin Verlander currently earns a salary of $28,000,000 per year for the Houston Astros. If the Astros were to sign Cy Young as part of their 2020 roster, he could expect to earn a cool $35,452,471 a year thanks to his superior earned run average. 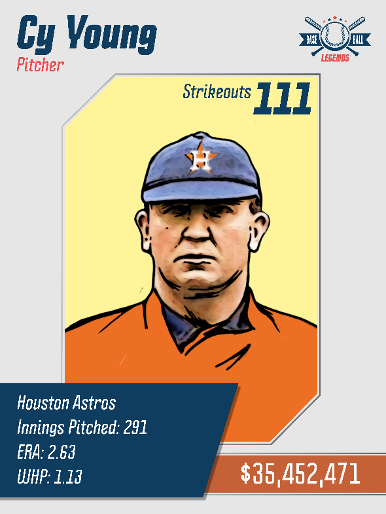 Stan ‘The Man’ Musial played for the St. Louis Cardinals and became the first ballot inductee to the Baseball Hall of Fame in 1969. With a career total of 6,134 bases, he’s only second to Hank Aaron, and he won three World Championships with the Cardinals. Detroit Tigers’ Miguel Cabrera has hit 30 or more runs in ten separate seasons and has the 33rd highest career slugging percentage of all time.

The Venezuelan first baseman is also an eleven-time All-Star player, whereas Musial has nine All-Star records.

Musial’s illustrious career means that he has a higher 162-game average for runs, hits and RBI. Our analysis found that he’d be earning $50,172,414 if he were signed by Cabrera’s Detroit Tigers today. 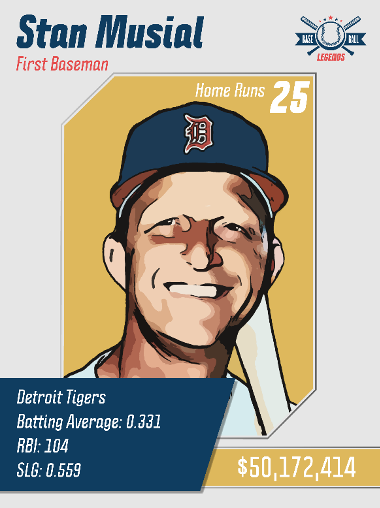 New York Yankee’s Joe DiMaggio was an All-Star in every one of his thirteen seasons and won the World Series nine times, making him the second-most decorated player in MLB history. Being compared to DiMaggio is a tough ask for any player, but Céspedes, a two-time All-Star, plus Golden Glove and Silver Slugger winner, holds his ground.

Despite never winning a World Series, Céspedes did appear in the 2015 game as a New York Met.

With DiMaggio proving himself as a born winner over the space of his thirteen-year career, it’s no shock that he would be paid much more if he were to turn out for the Yankees’ rival the New York Mets today, with a $40,537,634 annual salary. 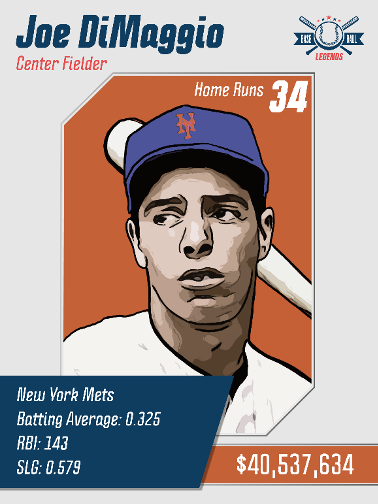 Barry Bonds Vs Will Myers

Having played 22 seasons for the Pittsburgh Pirates and San Francisco Giants, Barry Bonds won 8 Golden Glove awards, 12 Silver Slugger and 7 NL MVP awards, amongst other accolades in his career. Will Myers of the San Diego Padres can’t quite match up to the number of awards won by Bonds in his career but does have a single All-Star appearance to his name.

Myers recently moved from baseman to outfielder for the Padres, meaning his stats have altered slightly.

Bonds is one undisputed legend of the game, meaning his runs, hits, home runs, RBI and stolen bases are all higher than Myers’. For that reason, our statistics show that he’d be earning $38,437,500 at the San Diego Padres in 2020. 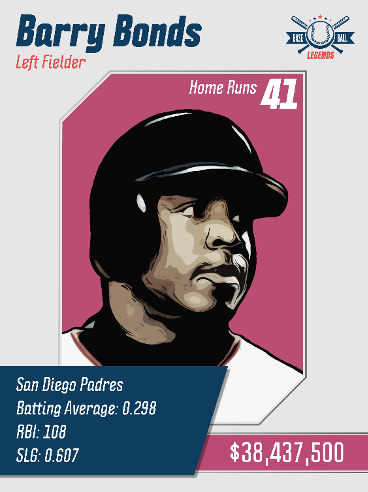 Lou Gehrig, known as ‘The Iron Horse’ for his hitting prowess, is one of the New York Yankees’ greatest first basemen. The six-time World Series winner and Hall of Fame member won two AL MVP awards, as well as the AL Batting Champion and Triple Crown in 1934. Albert Pujols of the Los Angeles Angels, and previously St. Louis Cardinals, has won two World Series rings, as well as three NL MVP awards. 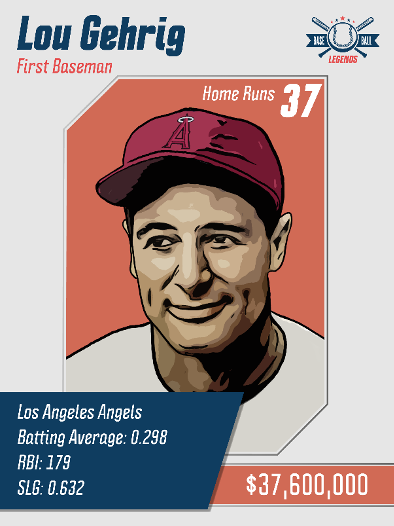 ‘The Ryan Express’ is a one-time World Series champion, and an eleven-time strikeout leader. Having played for the California Angels, Houston Astros and Texas Rangers, Nolan Ryan is one of only five pitchers inducted into the Baseball Hall of Fame. Steven Strasburg is currently pitcher at Washington Nationals, where he won the World Series in 2019.

Strasburg also has a World Series MVP and a Silver Slugger award to his name.

Maybe pitching is the one part of the game that hasn’t changed dramatically over the years, but our statistics indicate that, even if he were to turn out for the Washington Nationals in 2020, Nolan Ryan would only earn $726,141 more than Steven Strasburg. 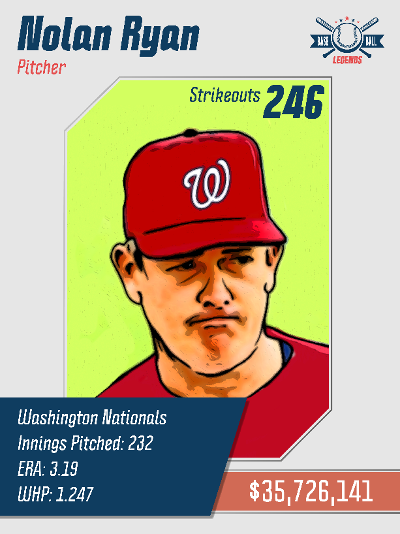 Our analysis just shows how great some of the biggest legends in the history of baseball really were. Comparing them over the same average number of games highlights big differences in the performances of our legends compared to their modern-day equivalents. It also shows how, with the increase in salaries in MLB, these legends would have been paid huge amounts more money than they ever earned in their career.